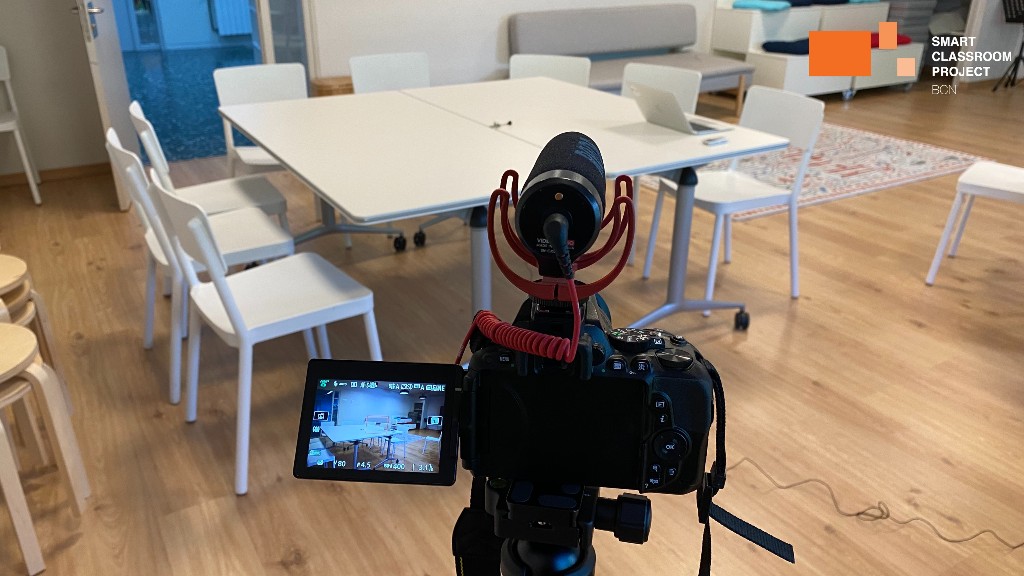 Science tells us that we learn better and more by collaborating, and therefore the space must favour this
(Photo: Smartclassroomproject.com)

Science tells us that we learn better and more by collaborating, and therefore the space must favour this
(Photo: Smartclassroomproject.com)

Several studies have already acknowledged the benefits of a suitably designed classroom.

A study led by the UOC gathered teachers' opinions about the classrooms in which they teach.

The image of rows of chairs and desks facing a teacher at a blackboard has been a reality for decades. However, research reveals that this way of organizing the classroom furniture in schools is not the best way for favouring the learning process. Especially if the needs of 21st-century students are taken into account, who, according to the OECD, require a social environment that fosters autonomy, flexibility, decision-making capacity and the connection of knowledge by individual students or through teamwork.

It is also the opinion of 6 out of every 10 teachers that changing the design of the classroom is key to improving learning. This was the result of a recent study conducted by researchers of the Universitat Oberta de Catalunya (UOC), Universitat Autònoma de Barcelona (UAB), Universitat de Barcelona (UB), Universitat de Vic (UVic) and Universidad Simón Bolívar (USB), in which 847 preschool, primary and secondary school teachers from 40 schools participated. "We assume that's what the spaces should be like without giving it much thought or without connecting what we're innovating in terms of methodology with the place in which we're going to put that into practice," said Guillermo Bautista, member of the Smart Classroom Project research group of the UOC and principal investigator in this study. That's why we need to make the Smart Learning Space a reality: "a space that meets any learning need or proposal, that is flexible and not zoned, in which physical and psychological well-being are prioritized as the foundations upon which the learning activity can take place, in which the pupils play a proactive and autonomous role," said Bautista.

Several studies have already acknowledged the benefits of a suitably-designed classroom. This was one of the reasons why the Consorci d'Educació de Barcelona started replacing the furniture in 487 classrooms a few weeks ago, whilst also reorganizing the spaces to obtain motivating environments that encourage discovery. And, as the authors of the UOC-led study point out, it's that the skills and learning needs of today's pupils not only oblige us to rethink our teaching practices or the inclusion of digital resources, they also require changes in the learning spaces in general.

Guillermo Bautista demonstrates this with an example: as he explains, science tells us that we learn better and more by collaborating, and therefore the space must favour this collaboration and interaction, also taking into account what research tells us about collaborative learning. If we organize the activity with groups of four students based on a challenge or a project, it would be logical that the space should be suitable to enable the group to collaborate and also enable a certain amount of autonomy for using the resources it needs, for moving, looking around, experimenting, and self-organizing, etc. "This means that not all of the groups will be doing the same thing at the same time, and the same resources will not be necessary for everyone. The activity in the classroom is diverse and the space must constantly respond to this organizational diversity of use, resources, movements," he explained.

However, the strong assumption upheld for decades that the classroom is as it is, has resulted in us proposing few changes. And when these are finally being proposed, the direction of these changes is not easy to decide upon, "and that is why our research is necessary, to help establish criteria so that the space is changed with guarantees," he said.

Changes in the design of secondary school classrooms also

Currently, most teachers negatively rate the organization of the environment in their classroom. This is one of the findings of the study, whereby low or moderate scores were obtained regarding the suitability of current classrooms to serve as comprehensive learning spaces. But differences exist between the different levels of education, as the design of preschool and primary education learning spaces is generally more flexible, collaborative and personal, affirm the authors of the study, who point to a possible reason for this scenario. "It is precisely in the infant and primary stages where teaching trends such as those applied since the early 20th century (in which the spaces, their layout, furniture, etc. were already linked to clear educational meanings) have been most present and usually more visible," said Angelina Sánchez-Martí, researcher of the Smart Classroom Project and Serra Húnter professor at the Universitat Autònoma de Barcelona.

On the other hand, the traditional layout of the spaces is much more established among secondary school centres and teachers. That's why the authors of the study positively value the fact that during the study it was confirmed that there are teachers and centres from this stage of education who are aware that their spaces do not correspond with the methodologies that they want to implement. "The Smart Spaces that we have implemented as part of the research are co-designed, applying a thoroughness, rigorousness, and seeking to meet the highest objectives and results for learning proposed by each centre. And these spaces are needed in all of the stages," said Bautista.

Another result to highlight is that the teachers are especially critical when it comes to appraising the integration of technology in the classrooms. But in the opinion of the authors of the study, this data is not surprising as "it is precisely the new technologies that are threatening the traditional times and spaces, and therefore demand great flexibility and a constant adaptation to change, as well as a reformulation of the learning spaces", said Sánchez-Martí. She added that the possibilities that technological integration offers in terms of creating new ways to relate and learn "completely clashes with the very standardized design derived from the idea that schools must be based on classrooms per se, when this does not necessarily have to be the case." 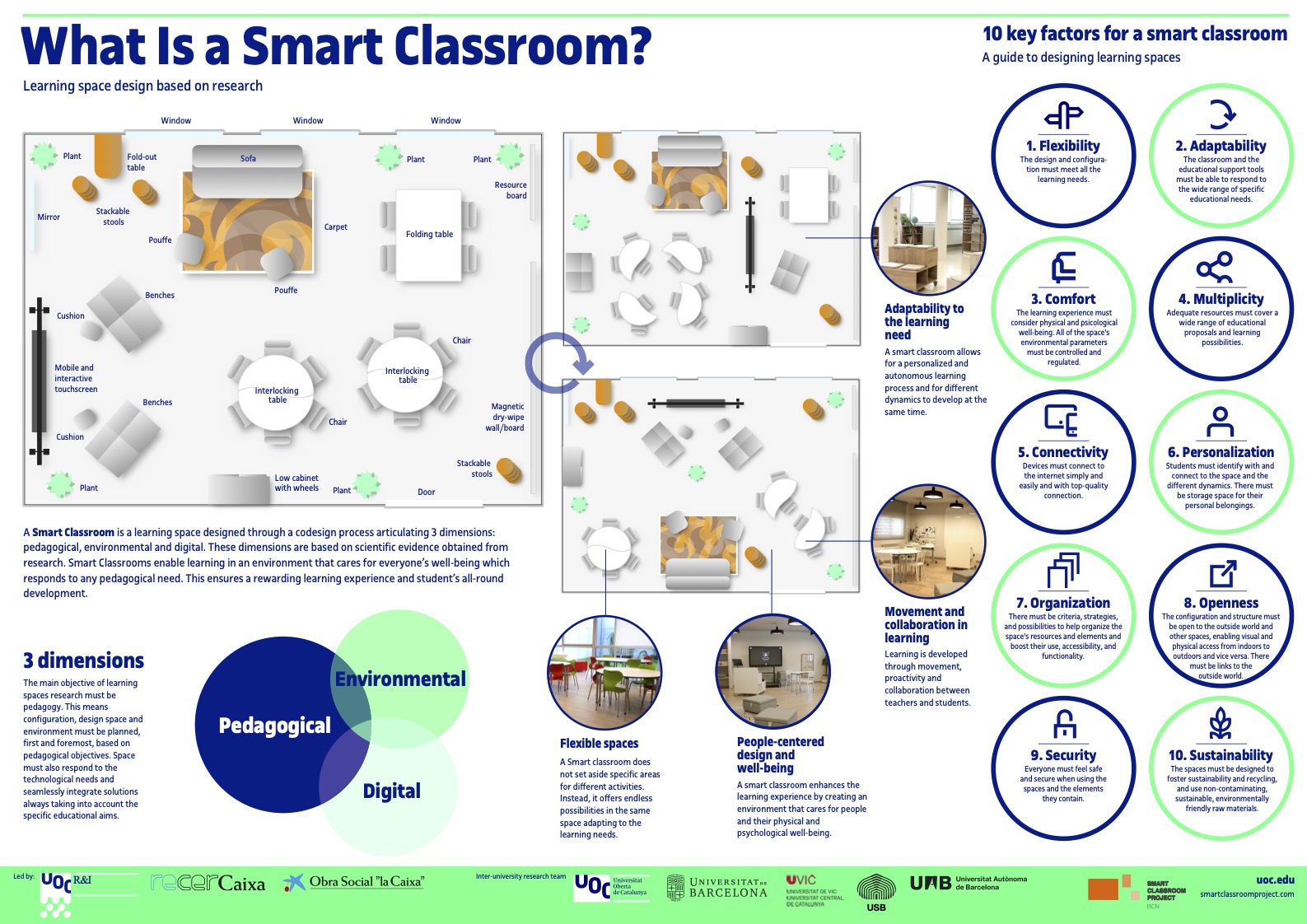 This study has been financed by the RecerCaixa Smart Classroom project. Codesign of innovative learning environments. Investigating new classroom models. Expert in: School curricula; school teaching; integration and use of ICT for teaching in schools; training in the use of new technologies; ICT and family.