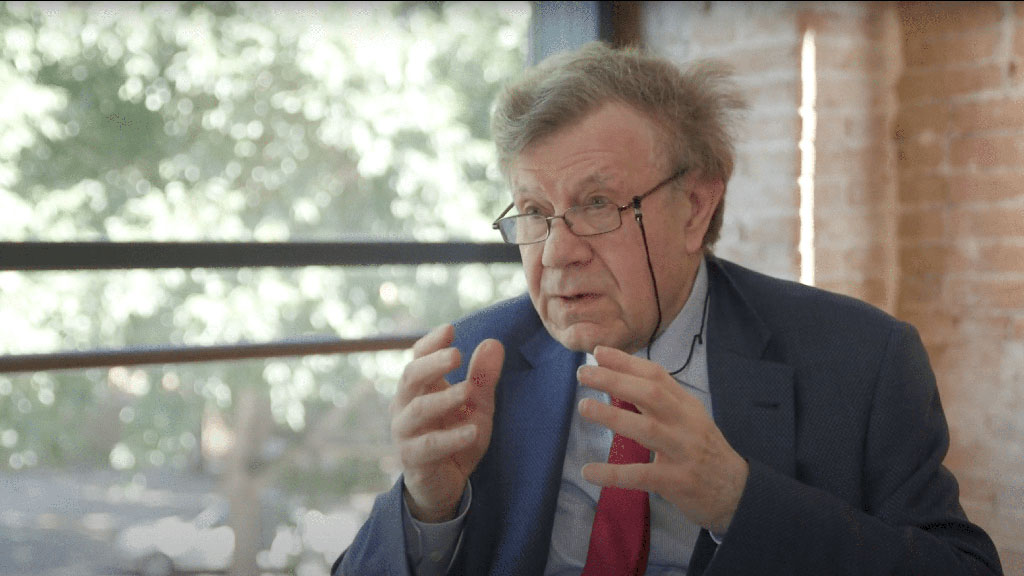 The renowned historian of books Roger Chartier, the most prominent member of the fourth generation of the influential Annales school, recently gave a lecture at the Universitat Oberta de Catalunya (UOC) entitled "Cultural history and textual criticism. Mobility and materiality of texts". Chartier also led the seminar on "The materiality of texts in the age of their digital reproducibility", organized by the Global Literary Studies Research Lab (globaLS), a research group led by the ICREA researcher Diana Roig-Sanz, affiliated to the Faculty of Arts and Humanities and the Internet Interdisciplinary Institute (IN3).

We took advantage of the opportunity to speak to the distinguished professor, who in this interview reflected on how the digital revolution has affected reading and publishing, and explained how books have defined the history of mankind.

Where does your interest in the world of books come from?

People who love books often answer this question by saying that they've loved books ever since they were a child. That doesn't apply to me. There are two types of book lovers: there are "heirs", who've inherited their love of books from their parents, and were able to read in the family library, and people who were "conquered", by which I mean they were conquered by books, as they were born in an environment that was devoid of books due to specific social conditions. In my case, as a "conquered" reader, primary school played a crucial role, as it was where I first had access to books. At school, I discovered authors such as Jules Verne and other classics, thanks to collections adapted for children, such as the "Rouge et Or" and the "Bibliothèque Verte" collections.

We are immersed in the revolution of the digital book. What do you think of this great transformation? Is it comparable to other revolutions that books have experienced?

The digital revolution is the most spectacular because it's transformed the medium, the technique used to convey texts, and the practice of reading. These three changes have never happened at the same time in history, as is the case with the digital book.

The revolutions that books experienced in other eras involved changes in some of these aspects. In the early Christian era, the codex (with bound pages) was born, which created books as we know them today, which marked the end of the format that had existed until then (papyrus scrolls). Gutenberg's printing press (1440) made it possible to reproduce a book without copying it for the first time. It was a major revolution from the technical point of view.

And reading has basically experienced three revolutions. The first was the transition from reading aloud - which is what happened in the early Middle Ages in monasteries, where reading was in Latin - to reading silently. The second revolution took place in the 18th century, when there was a shift from a limited corpus of books which were read intensively to more books being published and secular reading, which wasn't limited to the clerical class. The third revolution was literacy, in the 19th century, which occurred when children, the working class and women gained access to primary education.

The digitization revolution is historic, because it combines three revolutions in one: in the medium (the screen), a technical revolution (the digital transmission of texts, social media) and in terms of the way people read.

Digitization is an important instrument for the democratization of knowledge, but it's also a dangerous double-edged sword.

It's a powerful instrument for social transformation and communication which enables spaces for discussion and reflection to be created on an unprecedented scale. The internet has changed everything we do in our lives, not just reading: friendship, identity, the market, etc. However, the internet and the social media are a dangerous instrument that fuels the spread of fake news, the manipulation of ideas and the falsification of history for one simple reason: in social media, the criteria for evaluating the texts are no longer critical. Simply being on the social network gives the message some credibility, which is terrible for knowledge and for democracy. We've seen this with the circulation of absurd theories during the pandemic, with the manipulation of elections in countries like Brazil, and with the dangerous rewriting of history in several European countries. I have no clear diagnosis of what the digital revolution has meant for all of these reasons. We must be aware that digitization can create a world of manipulation and falsification.

"Digitization can create a world of manipulation and falsification"

The war between Ukraine and Russia is also being waged online. What is your opinion on this conflict?

I think this topic is beyond my area of expertise, and my answer is of no more value than that of the bartender who works at the bar on the corner. There are too many supposed intellectuals in the media who give their opinion on all kinds of issues, without knowing anything about them. They're always the same, and they give their opinions without knowing the facts, so I'm not going to talk about a field that isn't my specialist area.

Nevertheless, do you believe that education has the power to prevent wars?

It's very ambitious to think that education could be an instrument that can prevent wars. In any case, it's essential to encourage people to have some sense of critical thinking and to prevent the circulation of propaganda and falsehoods in the news. Critical thinking in front of the screen should be a subject in schools, because children know very well how to use technology, but they don't know how to navigate the world behind it, which is full of misinformation. In the world of print, it's easier to see the quality of a piece of information, but in the digital world everything has the same format and appearance. It's very important to foster a critical attitude to avoid people being deceived by manipulation.

In one of your books you ask whether books can cause revolutions. What is the answer?

All revolutions believe that they are based on books. For example, the Russian Revolution, with the texts by Marx and Engels; the Chinese Revolution, with Mao Tse Tung; and the French Revolution, with some authors of the Enlightenment. Paradoxically, the revolution declares that it's a complete rupture, but at the same time, it wants to have its prophets. What we can see is that some authors were considered as if their works had forecast this rupture before it happened. In my book The Cultural Origins of the French Revolution I discuss how the works of Voltaire and Rousseau, which attacked the court and the aristocracy, contributed to raising awareness and encouraging disobedience to the authorities. However, I don't believe that books are capable of unleashing a revolution by themselves. The deeper reasons are always social or economic, although they do allow us to dream that another world is possible and create a horizon of change.

"Books allow us to dream that another world is possible"

Shakespeare, Cervantes, Molière... When we say that these authors have defined the history of literature, are we guilty of an overly Eurocentric perspective?

There's a new historiographical trend in which the Western world's monopoly on cultural history is coming to an end. This new perspective shows that the history of the book doesn't begin and end with the printing press, as Japan, Korea and China had a printed culture without the need for the press (they used the woodblock printing technique). In addition, Europe is the result of connections between various cultures, emigration, exchange of goods and ideas... This new, more global historiography has been gaining in importance over the last 20 or 30 years.

Éditer et traduire, your most recent book, discusses two activities that digitization has profoundly transformed. Will machine translation put an end to the profession of translation?

It's true that automatic translators have improved a great deal, and are becoming increasingly accurate. They're useful for emails, administrative issues…, but you can't use them to translate a history book, novel or poetry. Today, the crisis in the book market and the fact that young people don't read books has greatly reduced the number of translations by publishers, who are careful because they don't want to lose money. Half of our young people don't buy books in any format (either digital or printed), and the phrase "We've never read so much" isn't true, as reading on social media isn't the same as reading a book. A great deal of fiction and beauty has become inaccessible with the decline in translated works. It's one of the indirect effects of digitization.

How can we change this disheartening situation and encourage young people to read?

By prohibiting them from reading! Instead of doing a campaign that talks about how interesting it is to read, there should be a campaign that presents reading as something that is forbidden... The problem lies in dragging these young readers away from digital reading, which is fast and impatient, to reading books, which is slow, attentive and critical. We must teach them that reading has benefits, and get people to give up social media... It's not easy. Schools and the media must understand that they have this responsibility.