Menu
Listen
"Catalonia is a haven, where people treat me like one of their own" 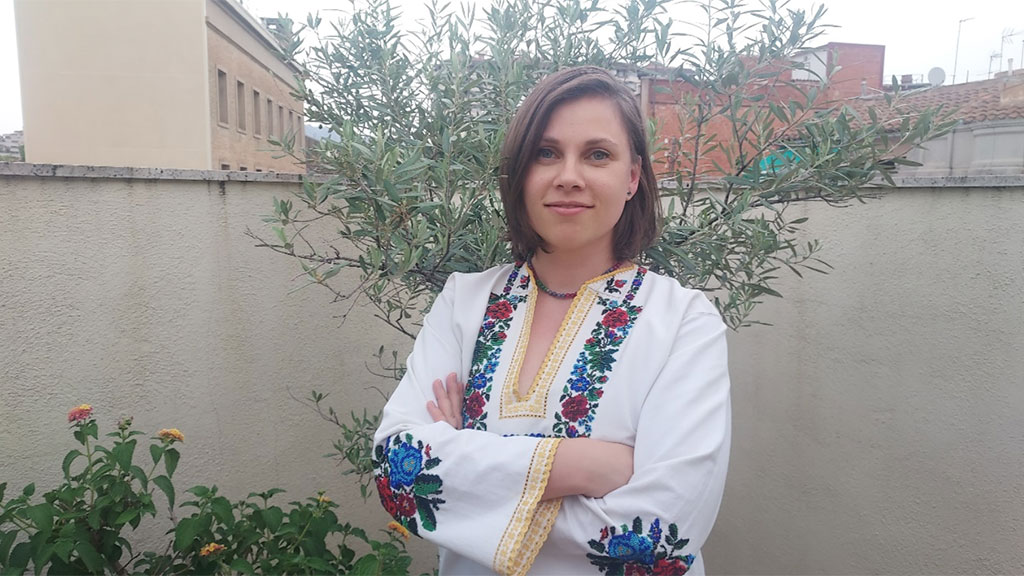 Oksana Andriyevska leads two lives every day. One in Terrassa, with her Catalan husband, her children, her job, the market, her classes, going for a walk on Saturday… a life like ours. The other, which is much more precarious, is in Kyiv, where her father is working as a volunteer driver for doctors who visit the city's suburbs where the hospitals have closed down. She went to fetch her mother at the country's border with Slovakia on 5 March to bring her to Catalonia, away from the bombing. Oksana, who is Ukrainian and was born in the Soviet Union, studied Spanish at school. She first went to Terrassa, the capital of the El Vallès Occidental region, in 2000 as part of an exchange programme, during which she stayed with a host family. She was fourteen years old, and had no idea that the town would end up being her home. Oksana, who works as an accounts assistant and speaks six languages, dreams of becoming a translator and is studying Translation, Interpreting and Applied Linguistics at the UOC. She is extremely worried about events elsewhere every day: "evil cannot win," she said in a tone that is simultaneously wishful, beseeching and defiant.

When you were in secondary school, you came to Terrassa. What memories do you have of that first visit?

I received a lifetime vaccination against stereotypes. I thought everyone here was dark, spoke Spanish and danced flamenco. I came to stay with a Catalan-speaking family, and half of them had blue eyes and blond hair. Can you imagine? Other than that, I was struck by things like the sea and the mountains being so close to each other, people being so good-looking... really, everyone! And teenagers being so affectionate with each other, holding and kissing each other. I had come from the Soviet Union! We were coming out of the economic collapse of the 1990s, and we had nothing. Our economic situation was very difficult. This country is a haven, with wonderful people who treated me like one of their own. It was just one summer..., but I came back two years later!

Then you started university in Kyiv...

Yes, I studied Economics, but then I did a master's degree in Journalism. I started working as a TV editor, and I found a job in Lyon, on the team at Ukrainian Euronews. A few years later, in 2015, I met up with a Catalan friend again, and love brought me back to Terrassa. We're now the parents of two children.

And Catalonia became your home. Integration for an exchange student and for a professional adult must have been different.

I spoke Spanish, but I signed up at the Centre de Normalització Lingüística language school when I arrived. I passed the C2 exam in 2021. What's difficult for me isn't the language or the people... it's finding a job, and I understand that it's difficult, whether you're a foreigner or not, these days. I've done a lot of things: when the invasion of Crimea happened, I worked as a freelancer for a lot of Ukrainian channels. At that time, people made a lot of comparisons between the situation they were experiencing there and the one the Catalans experienced here, although I think there is no comparison. I've worked in a restaurant, in an office, always on a temporary basis, now I'm an accounts assistant and the truth is I'm happy... But what I'm very proud of is my translation of two children's books by Josep Lluís Badal from Catalan into Ukrainian. I love the world of books! They called me from a publishing house in my country, and since I could do the translation straight from the language in which the author had written it, they commissioned me.

It was the beginning of a vocation...

I speak Ukrainian, Russian, Spanish, Catalan, English and a little bit of French... I like languages, and I'd like to work as a translator. I heard about the UOC and I enrolled. My experience has been very positive. My tutor helped me a lot... you can imagine, with two children and working... The teaching staff were very nice, and although I prefer books on paper, smelling them, thanks to the UOC I can study at my own pace and I'll have the qualification in the end, however long it takes. I'll be a translator even if I'm 50 by the time I manage it! And what can I say about my classmates? Sometimes it's hard to work in a group, but the people at the UOC want to study, they're doing it because they've chosen to do it, and they're very responsible, so I've learned new things from my classmates.

Then came the war...

Yes, and now I can't concentrate, my mind is elsewhere. I've stopped studying this year, but I miss it. Before the day the war broke out, people had been talking about it for weeks. We got up at five in the morning, and it was all starting there: my parents live in a new building, and they don't have a basement to hide from the bombings, so they hid in people's pantries. We recently had the fireworks to celebrate the start the summer. I didn't enjoy it: any noise reminds me so much of what we've gone through, and what they're going through now. I remember the Orange Revolution took place during my first year at university, and we succeeded in making changes happen by singing and dancing. It was fantastic! But in February 2014 they started shooting people because we wanted closer ties with the European Union. I left for France, and war broke out in the Donbass and Crimea. I have many journalist friends in the East. All that was the beginning and now...

It can't be easy to be far away when your family, colleagues and friends are suffering.

My life is here, but I keep wondering how I can help. I have a journalist friend who started an NGO a few years ago to help children affected by war, called Les Veus dels nens [The Voices of Children]. They have a website where they provide information and they ask for help collecting materials, providing psychological help for kids… and I help by translating the texts. When you're a long way from your country, which is at war and where people are suffering, and you feel a strange type of guilt. I don't want to be one of those people who aren't living through the day-to-day situation in Ukraine and give their opinions thinking that they know what's happening better than anyone else – I want to offer my support.

We've all been shocked by children and women leaving the country.

We all went to fetch my mother: we crossed nine countries in two days until we reached the border with Slovakia. My daughter was so anxious that I couldn't let her go to school. Do you know what she tells me? That she's tired, that her grandfather has stayed there, that she knows that the bad guys have more weapons, and that they'll win. I tell her that we'll try to stand up for ourselves, and that the world will help us... I tell her, and I tell the citizens of Russia that you can change the president and the government by taking to the streets, that we cannot surrender or believe all the propaganda. We have a lot of experience in fighting for our lives. During the Second World War, when my grandfather was small, my great-grandfather was sent to Siberia. The Nazis shot him.

A wish in this difficult time...

I worry, and I'm sure I worry more because I'm a mother. I imagine the women there who can't take their kids out of the basement, they can't take them to school or out to play, they can't feed them... I want this suffering to end. Evil cannot win.